Blogging on Issues of International and European Security 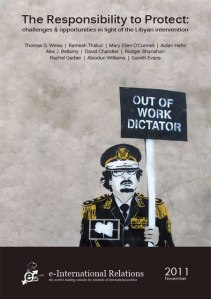 The workshop was chaired by Joachim Koops, Director of the GGI, and the expert panel was composed of Daniel Fiott, Researcher at the Madariaga Foundation Brussels, Dr. Robert Zuber, Director of Global Action to Prevent War, Dr. Hylke Dijkstra from Maastricht University and Prof. Giovanni Faleg, from the Centre for European Policy Studies. The workshop culminated with the intervention of Prof. Jolyon Howorth from Yale University, who delivered the keynote speech on lessons of the Libyan intervention for CSDP and NATO.

Daniel Fiott spoke about the Responsibility to Protect (R2P) norm in a multipolar world, and argued that Western legitimacy for R2P was decreasing in a context of rising powers (BRICS) and of financial pressure exerted upon EU and NATO defence budgets. Prof. Zuber touched upon the importance of assessment by the Security Council of the UN Resolution 1973 and of its implementation. Dr. Hylke Dijkstra examined the functional division of labour among international organisations and provided a three-fold response focusing on the issues of: unavailability, competition, and post-conflict planning.  Prof. Faleg summarized the panelists’ positions and opened the discussion by provocatively asking if Libya had caused the end of R2P, especially for the European Union.

Finally, Prof. Howorth’s speech focused on the ‘fiasco’ that the NATO intervention in Libya represented for CSDP. He argued that Libya was the momentum CSDP needed to go forward and for the EU to establish its role as a consequential security actor. He drew upon his latest articles to call for a reinvention and merging of NATO and CSDP in what could be a ‘European Security Organisation’.

The workshop ended with a discussion on the significance of NATO’s survival in the post-USSR era, Prof. Zuber raising the issue of the NATO’s provocative or securing nature today.

For more information about the event please visit here.